The intent of this section is to discuss a slightly more advanced topic related to animation, namely how and when we invalidate a frame, what that actually means, and how to code well with it.

The outline of this bonus chapter is as follows:

Gio only updates what you see when a FrameEvent is generated. This can be for example when a key is pressed, mouse is clicked, widget receives or loses focus. That makes perfect sense, with refresh rates of up to 120 frames per second for modern devices, chances are that what should be displayed quite often is identical to the last frame.

Quite often. But not always.

One exception to this rule is animation. When animating, you want it to run as smooth as possible. To achieve this, we need to ask Gio to redraw continuously. And without triggering events we need to explicitly tell Gio to do so. That is done by calling invalidate.

2. To ways to invalidate

There are two alternatives, let’s look at both:

Depending on the complexity of your layouts, this one might push your machine a bit. However, with improved caching that system load is reduced. If that works for your application you are good to go.

If however you prefer to set the framerate using a central ticking progressIncrementer, there’s an example of w.Invalidate() from Chapter 7 - Animation, and one in kitchen from the front page of gioui.org. To repeat the former:

Can do better than that? Why not use the IncrementOp{At time.Time} instead of the central ticker? We need to move it into the Layout section inside FrameEvent. Here’s how that rigid would look:

Take a look in the code for the animation. You’ll find the above op.InvalidateOp{} on line 201, and the old w.Invalidate() on line 255. Try changing running either one or the other to see which one performs best.

To try it out I ran three 60 second boils, one with each Invalidate method, both on my Macbook and my Windows desktop. On the Mac one was run with the old renderer, and one with the new using GIORENDERER=forcecompute go run main.go.

Without forcecompute the 2017 Macbook Air runs op.InvalidateOp{} at about 16-17% CPU, while w.Invalidate() consumes around 18-19%. Those levels drop to ca 12% and 15% with the compute renderer. The level is fairly high, but the difference is not that large. Still it’s worth knowing the effect of each invalidate technique. On my Windows machine the load is much smaller with no meaningful difference between the two techniques. 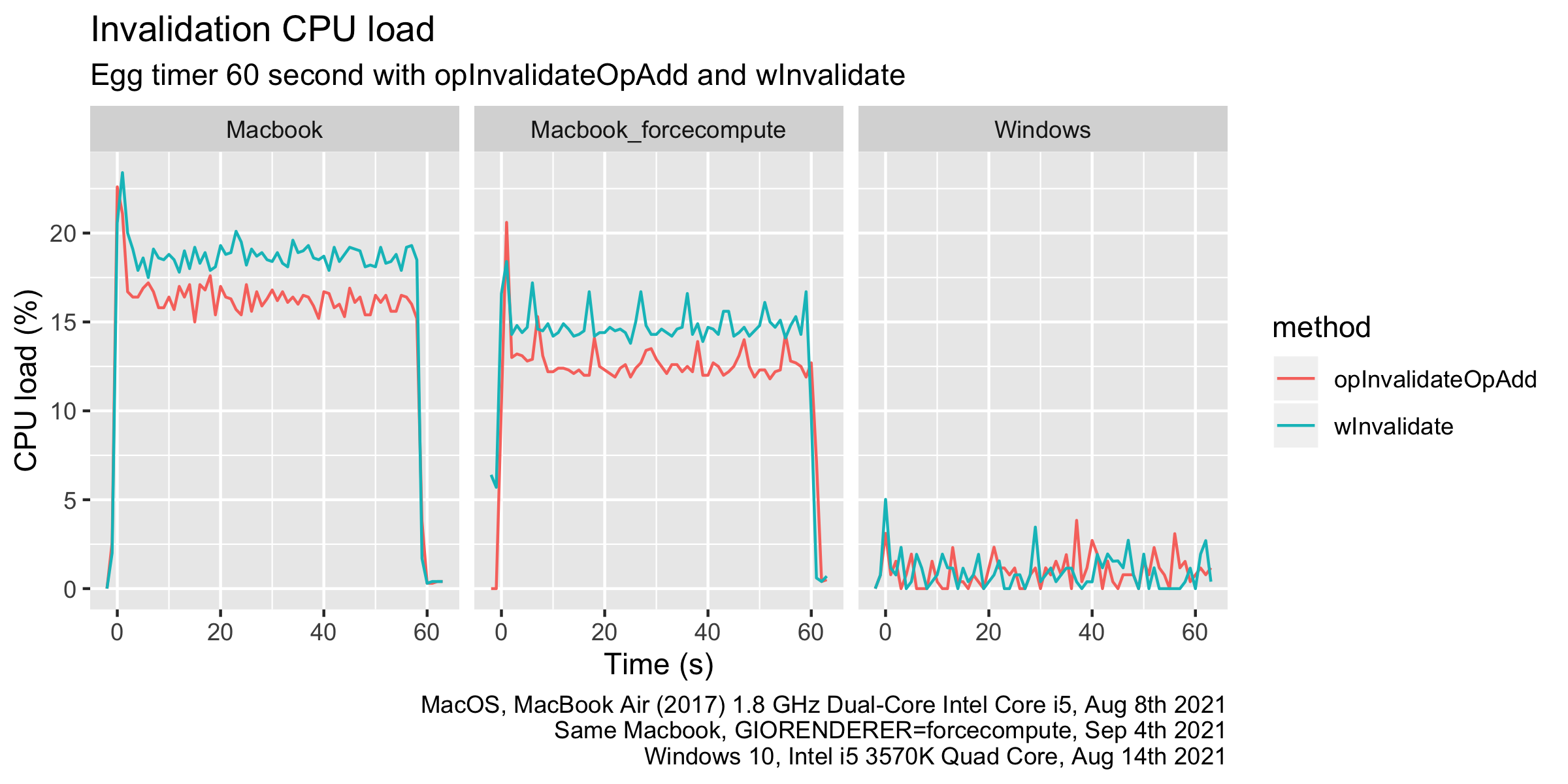 My friend Chris Waldon came through with this pattern:

In my Gio applications, I have found a pattern that I think works well for encapsulating animation logic. It allows you to hide the management of the invalidation behind an API, and to compute the progress as a function of time. It eliminates the ticker goroutine altogether, though I almost worry that it makes the app less cool.

Sound’s intriguing, right? You can find the raw code in his repo, but let’s examine it a bit here too:

First replace the state variables boiling and boilDuration with a struct that knows when we started, and how long it should take:

This allows us to create methods to animate next frame and eventually end the animation. This is where op.InvalidateOp{}.Add() is called.

Also, note how it uses gtx.Now instead of time.Now, most importantly ensuring the animation is synchronized, but also avoids some overhead from time.Now.

Finally a method to report on progress:

With that in place we can simplify the startButton.Clicked() code to:

Tidy up the loose end

At the, since we removed the boilDuration variable, we instead use anim.duration.Seconds():

All code related to the progressIncrementer channel, both variables, reading and writing to the chan, is removed.

We’re not going into more detail about the pattern here, but know it exists and has some pretty neat functionality that takes care of state and status for your animation.

Summing it all up, I hope this has shed some more light on the in’s and out’s of animation in Gio. As so often, it depends what’s the best solution. Showcasing a demo to impress? Go for smoothness. Minimizing work? Go for animation in steps. High end vs low end user hardware? Splurge or conserve as you see fit.

Just be conscious about the trade-offs and know some of the techniques that can assist.